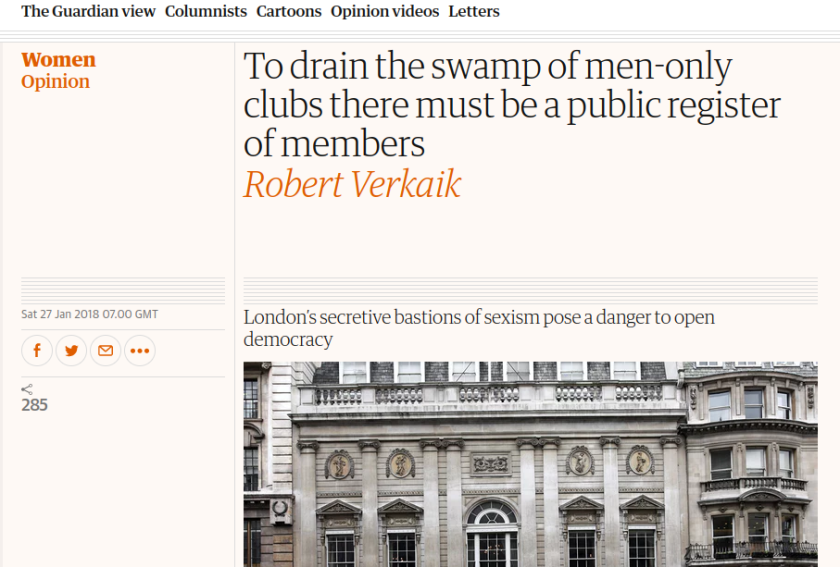 Many of the guests who enjoyed the hospitality of the now notorious Presidents Club annual charity dinner are also paying members of London’s popular gentlemen’s clubs.

It is easy to see how the sexist and secretive culture of some of these institutions influenced a groupthink according to which it was OK to set up an event that has reportedly evolved into some kind of gropefest.

The London gentlemen’s club scene grew out of a need for aristocrats and the wealthy middle-classes to come together in smoke-filled, female-free dining rooms in pursuit of exclusively male pleasures.

They quickly descended into dens of iniquity where drinking, gambling and prostitution were all part of the club’s lively entertainment.

One of the most fashionable was Brooks’s in St James’s Street in the West End. Its gambling excesses are legendary, culminating in a story of how in 1785 Lord Cholmondeley placed a bet with Lord Derby that he would win 500 guineas “whenever his lordship [fornicates with] a woman in a balloon one thousand yards from the Earth”.

Today these clubs, whose entry is still strictly controlled by the black ball, continue to honour some of their very un-PC traditions. The well-trodden route to membership is public school and university societies such as the Bullingdon and the Piers Gaveston.

Women are often unwelcome and in at least three well-known clubs they are barred from admission. One of them is Brooks’s. Another is David Cameron’s former club, of which his father was chairman, White’s, where Prince Charles held his stag night before his marriage to Diana.

But the third is perhaps the most curious of them all, raising questions about the clubs’ crossover into public life.

In an earlier incarnation, its motto was “Beef and liberty!” and members swore an oath of secrecy to the effect that “what happens in Beefsteak stays in the Beefsteak”. A similar aura of secrecy surrounds the club today. According to Who’s Who, among its members are the disgraced former MP Brooks Newmark (also a member of White’s) and the minister Rory Stewart. The Daily Mail reported that the foreign secretary’s father, Stanley Johnson, was a member and blocked Michael Gove, now the environment secretary, from joining. An online version of Who’s Who dated 1 December 2017 tells us that William Shawcross, the chair of the Charity Commission since 2012, is also a member, but the commission says this is incorrect.

These bastions of masculine entertainment can pose a danger to open democracy. It is the gentlemen’s clubs of London where politicians, bankers and hedge-fund managers meet to do deals and form secret alliances. Because membership lists are not disclosed to the public it is impossible to tell when a minister proposes a policy that favours the interests of members of his club. Neither is the public privy to the terms of the sacred oaths they may have sworn. And in a court of law shouldn’t the ordinary litigant know whether a judge is a member of the same club as the opposing party? There are a myriad of potential conflicts of interest rooted in the secret membership of gentlemen’s clubs.

In the City and among our professions, where senior offices are dominated by privately educated bankers, hedge fund managers, lawyers and accountants, such clandestine meetings and associations create perceptions of injustice.

So what can be done? In Britain it is legal to form a private members’ club whose membership is based on restrictive characteristics. There are women-only and ethnic-minority clubs which do not admit men or those of a different ethnicity. The government’s own guidance on the Equality Act says that while it is unlawful for a private club to discriminate against, harass or victimise an existing or potential member it is lawful to restrict membership to people who share a particular characteristic. This is not true for political parties, which cannot block membership on the basis of race or sex.

What is required is the compulsory publication of a register of members so that the public can be confident that the business of government and justice is not being done in the secret smoke-filled dining rooms of gentlemen’s clubs. A more transparent approach might also open up some of these gentlemen’s clubs to more adult attitudes towards women.

• Robert Verkaik is a freelance journalist

I'm a journalist and author writing about security, law and education. My first book, Jihadi John, the Making of a Terrorist, was published in 2016 by Oneworld. My second book is on private education and public schools and will be published in 2018. View all posts by robertverkaik1 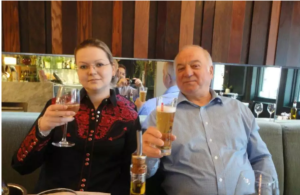 RICH RUSSIAN oligarchs are deserting Britain’s public schools, as the economic reality of the new cold war starts to bite.
Figures published by the Independent Schools Council (ISC), which represents 1,300 private schools in the UK, reveal a steep decline in numbers of Russian pupils being taught in the UK over the last three years.
The trend is believed to have been exacerbated by the nerve agent attack against a former Russian spy and his daughter in Salisbury in March this year.
Relations between Russia and Britain soured after Sergei and his daughter Yulia were targetted by the Russian state using a soviet-made poison called novichok.
A number of Russian diplomats and their families, including children at leading public schools, were expelled from the UK as Theresa May had no hesitation in blaming the Kremlin for master-minding the attack.

YULIA SKRIPAL  and the ‘art of disappearing’: Assuming a new identity in the internet age. By Robert Verkaik. The i June 25th.

The lives of Sergei Skripal and his daughter Yulia will never be the same again. After surviving a murder attempt alleged to be by the Russian state, they must now prepare to disappear, take on new identities and say goodbye to family and friends for ever. Yulia Skripal left hospital this week and will have already entered a shadow state of safe houses, false passports and Government-issued credit cards. She still needs medical care and may have begun her secret new life in the safety of a private medical clinic, away from the attention of the media, including unscrupulous members of the Russian press who found their way into Salisbury hospital where the Skripals were being treated.

FORMER SPIES who received six-figure redundancy pay-offs have been re-employed by MI6 as part of a massive £1.2 billion spend by Britain’s security services on hundreds of agents and outside contractors.
Three MI6 officers who received compensation packages are among 73 spies to be rehired by the service in a scramble to reverse staff cuts in the wake of the heightened terror threat facing the UK.
The Government’s top secret listening station, GCHQ, has rehired 200 former employees while MI5 has taken on just seven former officers.
But MPs have criticised the recruitment policy as “very poor value for money” which “highlight a lack of adequate skills planning.”
Members of Parliament’s Intelligence and Security Committee said in their annual report: “Whilst it may always be necessary to re-hire some former staff in exceptional circumstances, this should be kept to a minimum given the potentially significant costs involved.”
The overall cost of hiring consultants and contractors for last year reached £1.2 billion, a third of the combined budget of MI6, GCHQ and MI5. The report found that on average these temporary contractors were being paid up to £144,000 – twice the annual salary of their in-house staff.
In 2011 it was reported that twelve senior MI6 officers had won generous pay and pension packages as part of a secret deal struck with Ministers, ahead of a clampdown on civil servant pay in 2010.
The new report said  “This Committee previously criticised an expensive redundancy exercise run by SIS in 2011/12, when it made payments to 111 staff to take early retirement. Given that a few years later it is looking to increase staff numbers by considerably more than this, it does not appear to have been well planned.”
The head of MI6, Sir Alex Younger, refused to justify the policy, telling MPs: “I make it a rule not to comment on decisions made by my predecessors… I was not in the leadership then… It was an extraordinary time, do you remember? It was just after the banking crisis and all of that”.
MI6 is in the process of boosting its staff numbers from 2,368 full-time equivalent staff at March 2014 to 3,231 staff by March 2020 – a 36% increase in headcount over six years.
Questioned on whether it would be possible to bring in so many new staff so quickly, MI6 said: “So we are very aware that it is a challenge. If I focus on the absorption as opposed to the recruitment for the moment, a lot of the investment that we have been doing this year is in the things that will enable that, recruitment included, and up powering our learning and development effort, and we are looking really hard at what sort of people we bring in and where we are going to put them and then making sure they are going to be alongside people who are more experienced.”
MI6 was also asked to justify a £800,000 cost for employing outside business consultants to reorganise the structure of the service.
The report, pubished last month, found that GCHQ was facing competition from private tech and internet companies who could offer bigger pay-packets to attract its staff to the private sector.

A British Muslim man who claimed he was discriminated against after being stopped and questioned by police under terrorism laws has won the right to challenge the secret intelligence used against him.

The case could have far-reaching implications for the security services who use undisclosed intelligence to conduct tens of thousands of random stops at airports each year.

Shayab Miah, from Southampton, was stopped and detained for an hour by counter-terrorism police at Heathrow Airport after returning from India in August 2009.

Later Mr Miah, who was released without further action, complained to the Metropolitan Police that his detention was not based on a random stop but motivated by religious discrimination.

British spies have been citing a controversial security company, which is run by a former KGB-trained intelligence expert, to help warn the public about cyber and hacking attacks.
GCHQ, the UK’s frontline in cyber defence, has five times in the last year published “threat alerts” based on Moscow-headquartered agency, Kaspersky Lab.
Last week Kaspersky Lab faced claims that its software maybe being used by the Kremlin to spy on British banking customers.
Yet, as recently as November 10th, the UK’s National Cyber Security Centre, which is part of GCHQ, issued a threat alert citing Kaspersky research about the dangers of using dating apps.
http://www.telegraph.co.uk/news/2017/11/18/british-spies-using-controversial-security-company-run-former/